Bullet swaging die sets that are in-stock and can be shipped now are listed below. There may be one set in stock or there may be more than one. These are first come, first served so who-ever places an order first gets the set. The caliber and type of set (the type of bullet made) will change often so if you don’t see what you want now perhaps tomorrow it will be there. Complete die sets are usually listed.  However individual dies may be ordered instead of a complete set or in addition to a set.

All dies & accessories are for Walnut Hill press or other presses made by RCE, LLC™.  No other type of dies will be stocked or made.  To order please go to the “How To Order” page. 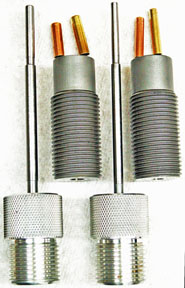 Three die set that makes a .224″  flat base bullet with a six degree truncated conical (TC) ogive.  The ogive is about 7/32″  (.219″) long with about a .180″ flat tip.  This is a bullet that would be good for the 22 Hornet and light bullet weights.  This bullet is especially good for the 218 Bee or other tubular magazine rifles.  It could be used in any rifle or handgun.

Three die set that makes a .224″  flat base bullet with a spire point ogive.  A spire point is like a sharp pencil.  It was a popular style into the 1940s but the spitzer ogive replaced it.  The ogive is about 5/32″ (.156″) long.  This is another bullet that would be good for the 22 Hornet and light  bullet weights.  The bullet to the left is an open tip made with a .600″ long jacket and is 42 grains.  The other bullet also made with a .600″ long jacket weighs 50 grains with the lead flush to the tip of the bullet.  For best accuracy seat the bullet out of the case a bit further than a spitzer bullet.

Three die set that makes a .224″  flat base bullet with a four caliber spitzer ogive.  The ogive is about 5/16″ long.  This would be good for the 22 Hornet and light  bullet weights.  Bullets weights from about 40 grains to 55 grains are usual.  Not the best photo but on the left is a 37 grain open tip bullet made with a 22 Short case, in the center a 48 grain open tip made with a .600″ J4 jacket, and on the right a 51 grain soft point made with a 22 Short case.

Three die set that makes a .224″  flat base, open tip bullet with an eight caliber spitzer ogive.    Fired 22LR cases can be used for the jacket but a longer jacket would be better.   A 22 Stinger case makes around a 62 gr. open tip.  The ogive is about 15/32″ (.234″) long.  To improve longer range performance add the rebated boattail set.

Three die set that makes a .224″  flat base, open tip bullet with a ten caliber spitzer ogive.  The ogive is about 1/2″ long.   Commercial jackets of .800″ or longer should be used.  This would make a very good target bullet for any distance but to improve longer range performance add the rebated boattail set.

Three die set that makes a .224″  flat base, open tip bullet with a VLD ogive.   VLD or ULD both are the same and supposedly are very low drag bullets but that’s mostly hype. Still they are good bullets but mostly for long range competition.  Commercial jackets of .850″ or longer should be used.  This would make a good target bullet for any distance but to improve longer range performance add the rebated boattail set.  Not recommended for hunting.

This set is used to convert a finished 224 bullet into a Dual Diameter bullet also called a Bore Rider bullet.  This is often used for bullets that have short ogives if the bullet is to be seated out of the cartridge case further to gain more powder room.  The bearing of the bullet is reduced from .224″ to .215″ for part of the length of the bearing.  The small diameter will enter the rifling and rest on the rifling lands.  The loaded cartridge can be ejected without having the bullet stuck in the rifling.   The dual diameter bullet is also popular with target shooters as the small diameter aligns and guides the bullet in the barrel.

The photo shows a round nose bullet, a 6S bullet, and a 6S bullet made with a fired 22LR case.  The center bullet shows the dual diameter the best.  The length of the reduced section can be varied as wanted.

The Rebated Boattail (RBT) add-on set is used with a Walnut Hill basic three die swage set.  A rebated boattail bullet can be made for those times when three hundred or longer shots are needed such as when shooting competition or varmints.  At closer distances the flat base bullet is just as good and often better. 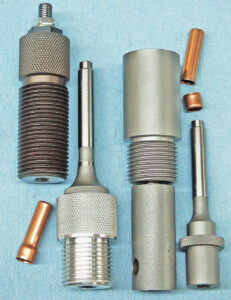 22LR to 224 jacket set and 243 to 224 redraw set are not included and must be purchased separately.  See the “Accessory Dies” section of the catalog.

264 (6.5 mm) set to make a rebated boattail (RBT) bullet that has a 10S spitzer ogive.   The set makes both flat base and rebated boattail base bullets.  Included in the set is a .210″ core swage, core seat, boattail 1 die, point form die, and punches for the RBT base.  Two core seating punches sized to fit 30 caliber J4 jackets redrawn to 264 caliber are supplied.   The 10S is a good bullet for longer distance competition shooting. 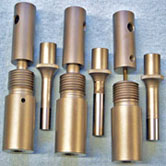 264 (6.5 mm) set to makes a flat base, open tip bullet that has a Long Round Nose (LRN) ogive.  This is similar to the Kynoch round nose bullets used for African cartridges.    Included in the set is a .210″ core swage, core seat, and the point form die.  Two core seating punches sized to fit 30 caliber J4 jackets redrawn to 264 caliber are supplied.   The LRN bullet would be useful for the 6.5 Jap or the 6.5 Carcano rifles or anytime that a longer round nose bullet is needed.